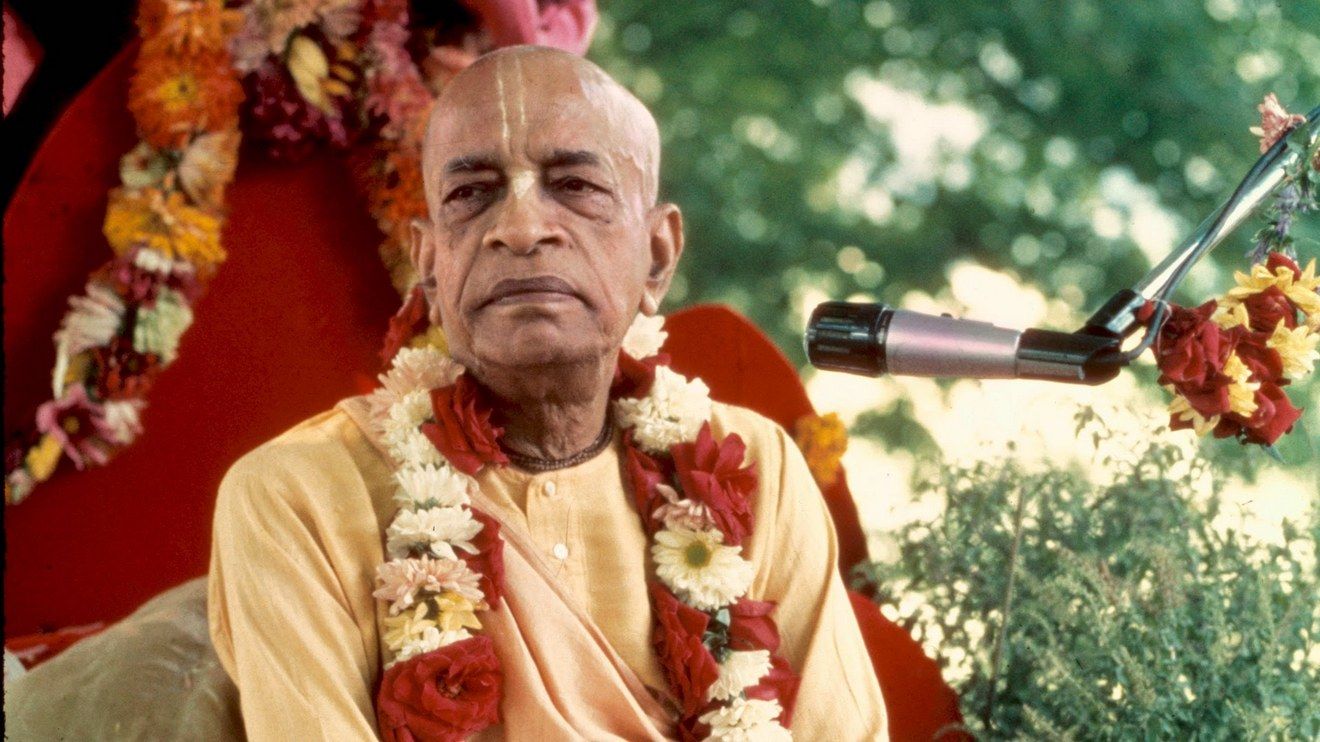 Written by Balaradhya dasi on 16 August 2020. Posted in Reflections.

Please accept my respectful obeisances.
All Glories to Shrila Gurudeva and Shrila Prabhupada!

An extract from "A transcendental diary" was published on BBT Archives’ Facebook Page a few days ago; a memoir written by Hari Shauri das, Shrila Prabhupada's servant, witnessing the first meeting at that time between our beloved Guru Maharaja and the One who became his Spiritual Master and eternal benefactor: His Divine Grace AC Bhaktivedanta Swami Prabhupada.

Hereafter you will find the original text.

With infinite gratitude to our Founder Acharya for having initiated Shriman Matsya Avatar Prabhu, thus granting us the mercy to meet him and transform our lives too.

Marco had an interesting background story as to how he came here to meet with Shrila Prabhupada.
This is his third visit to India. A highly successful furniture designer, at thirty one-years-old he owns six companies and enjoys a world-wide reputation. To all intents and purposes he has everything material anyone could want. But as he became increasingly successful, he began to find name, fame and fortune lacking in any satisfaction. Rather he was finding himself increasingly alone midst the increasing crowd of what he called "anonymous friends."

In 1974 he began to withdraw from his social circle and worldly commitments and embark on an introspective search. He visited China and came here to India, gradually becoming drawn to spirituality.
He was searching out a guide but failed to find anyone who could provide the inspiration to fulfill his needs.
Thus he decided to practice austerity and study seriously with the hope of purifying himself so that God would reveal to him the proper way to go.
He recently returned to India with Eliseo, a friend, and spent some time in an ashram in the Himalayas, intently studying Patanjali's Yoga Sutras.

While there he made friends with a man about the same age as himself.
As they attended the programs at the ashram and shared their thoughts, the man one day told him:
"If you want to be happy you have to devote your life to Krishna, and in order to do that you must meet Shrila Prabhupada. He can introduce you to Krishna. You should leave this place and go to Vrindavana and speak with Prabhupada."

Marco had never heard of Prabhupada and had no impression of Krishna as the Supreme Lord although he was reading Bhagavad-gita.
He was impressed with the man, who revealed that he was a Vaishnava and was there to preach.
He told Marco all about Prabhupada and explained the philosophy of Krishna consciousness, informing Marco that the version of Bhagavad-gita he was reading was not authentic.
He told him that Kriishna could only be revealed to him by a pure devotee and therefore he must come to meet Prabhupada.
Marco stopped attending the ashram and began meeting daily with the devotee on the banks of the Ganges.
The devotee taught him how to chant Hare Krishna and told him some of Shrila Prabhupada's pastimes.

Two days ago, he decided to leave the Himalayas and journey to Vrindavana to search out Shrila Prabhupada and Krishna.
Taking Eliseo with him, he traveled by train through Rishikesh, Haridwar, Delhi and finally arrived in Mathura.
Taking a tunga to Vrindavana, he arrived there in the late afternoon.
Not having any idea where to go he simply asked the horse cart driver to take him to the temple of Krishna.
For several hours he went from temple to temple asking for Shrila Prabhupada, until finally the tunga driver became frustrated. Perhaps thinking that Marco was leading him on without any intention of paying his fare, he became angry and simply dumped him and his companion with their luggage in the middle of the road and drove off. Tired and thirsty, he had no idea where to find Shrila Prabhupada.

As he sat by his luggage against a boundary wall he noticed a steel door and decided to knock.
He was overjoyed when the door opened to reveal one of our devotees, an Italian at that.
The devotee immediately brought him in, invited him to bathe and rest in the guest house and offered him prasadam. More importantly, he assured him that he would soon meet Shrila Prabhupada.

One of the Vrindavana brahmachari, Sajjanashraya das, who is of Italian origin and an old friend of mine from Australia, met with him and made him a life member on the spot. Marco easily handed over $300 cash that he had left over, but he was far more interested in the philosophy and Shrila Prabhupada, than in an official membership. They discussed devotional service and Sajjanashraya offered to come with him here to Delhi to meet Shrila Prabhupada. Thus, the following day, yesterday, they set off, armed with an introductory letter from the Vrindavana temple.

They arrived late last night, stayed in a hotel, and now finally got the opportunity to speak with His Divine Grace.
They came into Shrila Prabhupada’s sitting room and Marco immediately offered his obeisances, although he had never done that to anyone else before.
Although not fluent in English, Marco had no difficulty in communicating with Shrila Prabhupada through Sajjanashraya prabhu.
Shrila Prabhupada sat for a moment studying him, a mild yet grave countenance about him. Then he asked him, "Have we already met?"
Marco said no, but that he had been thinking of Shrila Prabhupada very intensely for the last few days. 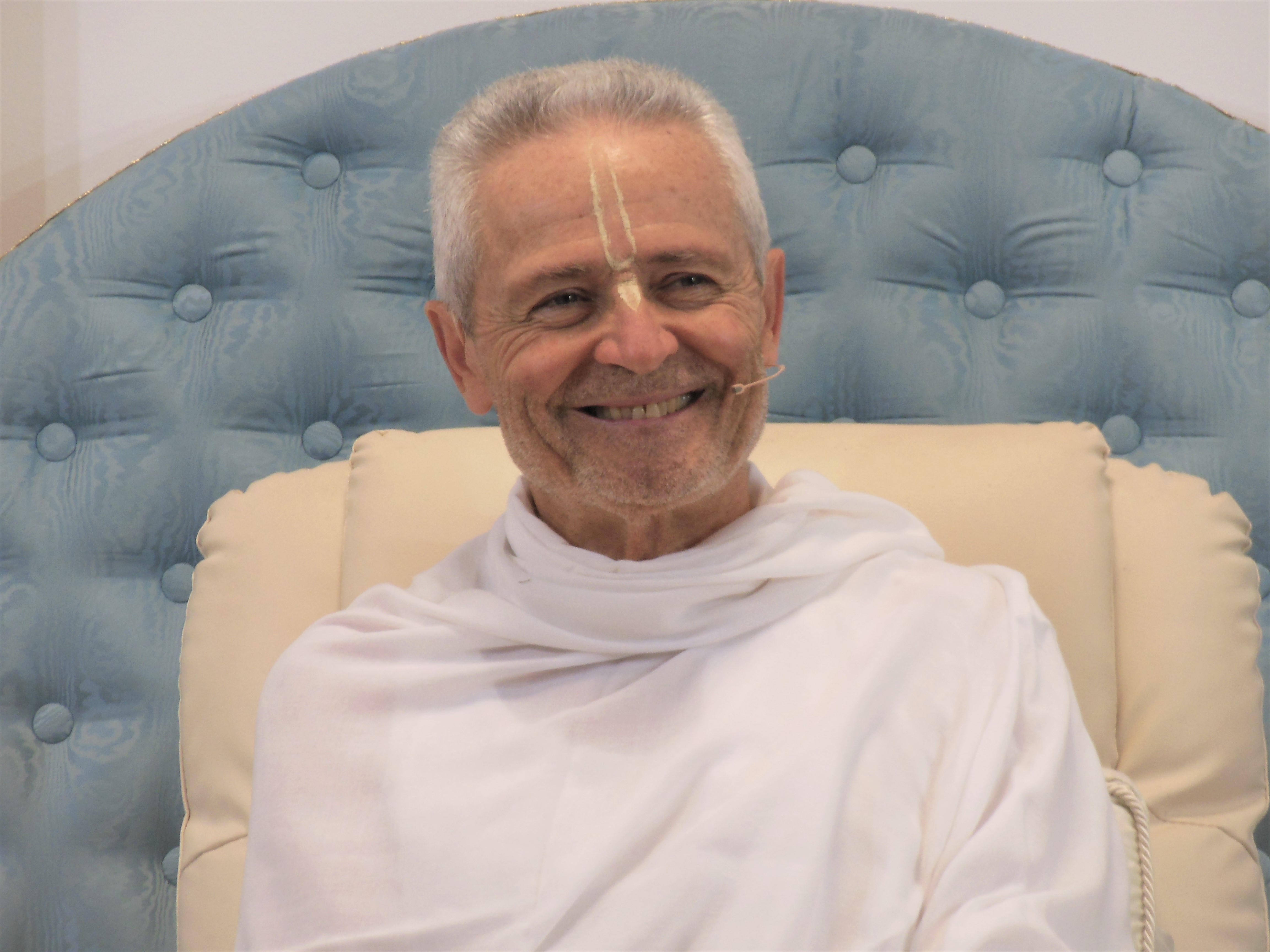 "Do you believe there is God?" Prabhupada asked him.
Marco said he did, and Shrila Prabhupada explained that unfortunately modern society does not believe in God, and therefore it is always defeated.
He told him that its so-called progress is simply the pretense of a society of ignorant people filling their lives with artificial needs.
Prabhupada said that the first step forward is to realize that we are not this body but spirit souls, part and parcel of Krishna; without this consciousness there can be no progress or happiness.
Prabhupada told him that the material body is meant for suffering but people are so ignorant they think that the miseries of life are natural or even enjoyable.

By immeasurable good fortune we now have this rare human form which is the only one through which we can re-establish our eternal relationship with God, Krishna.
Prabhupada said that life in the cities is hellish, but by leading a life of simple living and high thinking, based on the land and cows in harmony with nature, we can realize Krishna consciousness.
But because people think themselves to be independent they want to try to exploit nature.
Instead they are simply defeated by its laws. Therefore, he concluded, it is a society of cats and dogs.
"What do you think?" Prabhupada asked.
Marco felt that he had found the right person in which to place his trust. "I completely agree," he answered.
"So what is the problem?" Prabhupada asked him.
"Here with you, with the devotees, there is no problem," Marco said.
But he explained that he had to return to Italy to be married, as well as to manage six companies with his business partners; these may be big problems.

Prabhupada reassured him.
"Do not fear. Just become a devotee, chant Hare Krishna, read Bhagavad-gita As It Is and Krishna will reveal Himself. In the Gita you can find the solution to any material problem. To put an end to the cycle of birth and death and the transmigration of the soul we just have to know Krishna. There is no time to waste."

Prabhupada encouraged him to use his wealth and position in Krishna's service, quoting from Shrimad-Bhagavatam 10.22.35:
“Etavaj janma-saphalyam dehinam iha dehisu pranair arthair dhiya vaca sreya-acaranam sada”.
"It is the duty of every living being to perform welfare activities for the benefit of others with his life, wealth, intelligence and words."

Prabhupada explained that Krishna could be served by any one of these four items, but that by serving with one's very life, the other items—wealth, intelligence and words—would automatically be engaged.
Turning to Gopala Krishna Prabhu he asked him what the monthly budget was for the Vrindavana temple.
When Gopala Krishna stated the figure, Shrila Prabhupada informed Marco that we could spend any amount for Krishna's work.

"You are a talented man," he told him.
"Do you know where talents come from? Every talent belongs to God. He is the proprietor of everything, so the fruits of our talents and work should go to Him. So you simply engage your skills in Krishna's devotional service. Go home and chant Hare Krishna. Krishna will protect you. Don't have any fear."

Marco was fully gratified by his meeting with Shrila Prabhupada; his questions were all answered and his doubts removed. It was clear from his mood and excitement at having met His Divine Grace that he is a devotee. In contrast, his companion Eliseo had sat to one side and did not participate in the conversation, showing no interest in hearing from Shrila Prabhupada.

Just before they left the room, Sajjanashraya asked a question of his own. " Shrila Prabhupada, what is the most pleasing thing I can do for you?"
"Just become a pure devotee," Prabhupada told him.

After a few hours at the temple, Marco set off for the airport to return home to Italy, taking with him a copy of Bhagavad-gita As It Is. […]