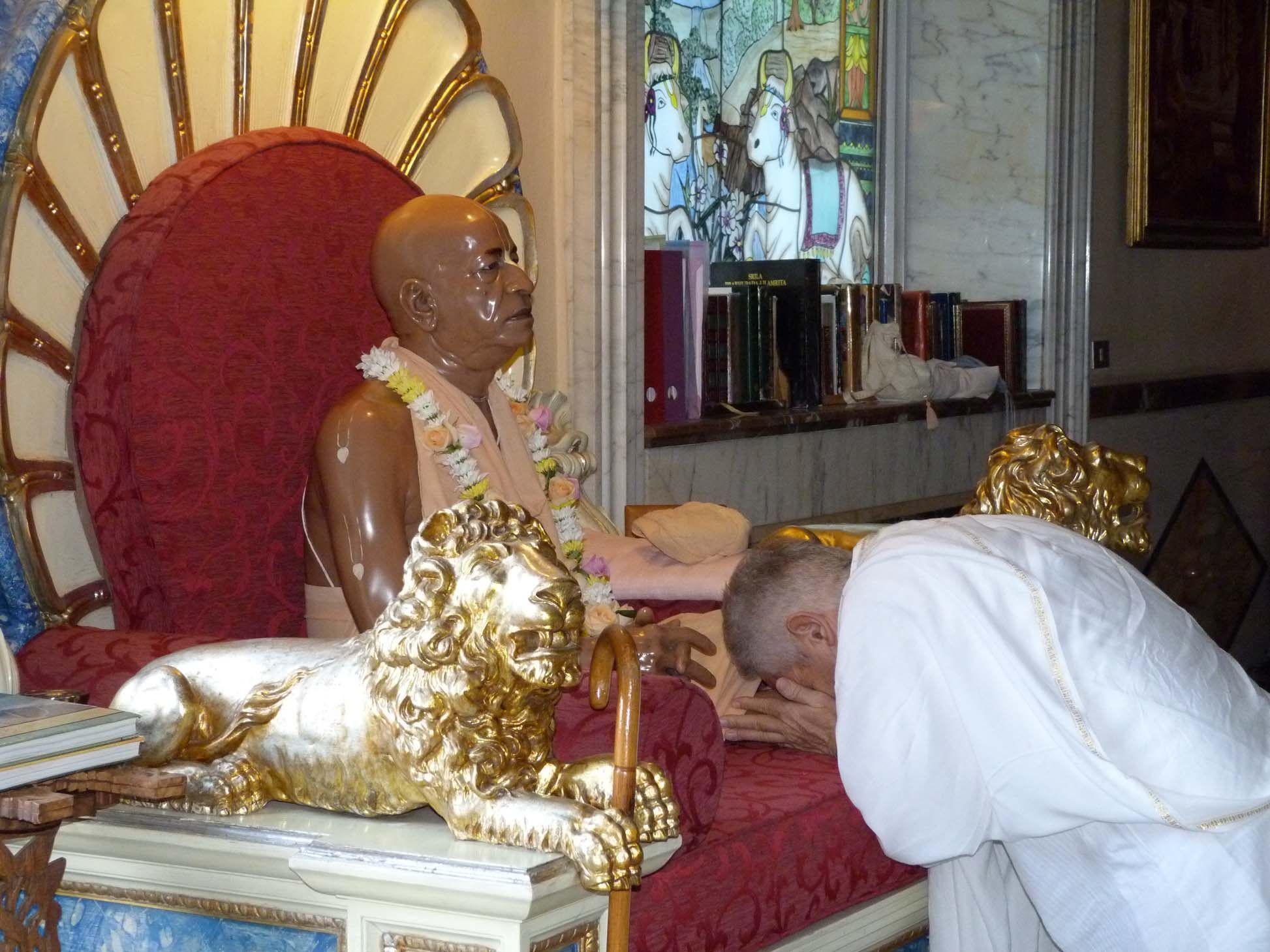 Written by Balaradhya dasi on 15 February 2019. Posted in Reflections.

Gratitude is an expression of Love

Dear devotees,
Please accept my respectful obeisances.
Glories to Shrila Gurudeva and Shrila Prabhupada!
We’d like to share with you evidence of the profound feeling of gratitude that our beloved Guru Maharaja often manifests for His Divine Grace A.C. Bhaktivedanta Swami Prabhupada (Founder Acarya of ISKCON).
On several occasions we have listened to his voice vibrating with emotion, seeing tears of love running down his face, while memories emerged and he shared them with us. All of this nourish our affection for Shrila Prabhupada and same desire to say "Thank you" for His great work and spiritual gifts we are still receiving.
The following are extracts from a lesson by Shriman Matsya Avatar Prabhu.
Your humble servant,
BalaRadhya dasi
"Since the first meeting with Shrila Prabhupada, He has been at the center of my existence. Gratitude is my most recurrent feeling, that unites me deeply with Him. Gratitude for showing me the way and enlightening my spiritual path. I was looking for the Light, but I did not know what it was, nor where was it. The meeting with Shrila Prabhupada has given a clear direction to my life. I was not looking for a religious conversion: I was looking for God, the meaning of my existence. The first time when I met Him, I realized it was a special occasion and that He was a special person. So, in his ashrama on that summer day, I felt the necessity and importance to entrust myself to Shrila Prabhupada. I have believed in Him and I’ve been investing my life in Him. I have learned to look at people, at the world, at life and God. I have understood how to reorganize priority values by reading His books, listening to His lessons, talking with His disciples and my godbrothers; thanks to him I have learned the art of bringing out the best in others and how to get closer to God. I have always considered ISKCON my spiritual family, for whom I have deep affection.
ISKCON is the project founded by Shrila Prabhupada to spread Krishna Consciousness all over world, to reveal the path of Bhakti to all those who wish to transform their lives with joy and love. The same joy that I have been feeling since then and for which I have developed immense and eternal gratitude to Shrila Prabhupada; according to His mercy, He is still guiding me, correcting me and inspiring me, even in my dreams."
Matsya Avatar das
Submit Vyasapuja Letter
Website managed by Shriman Matsyavatara dasa Prabhu's disciples. You can find MP3 sound files, photos, videos, articles, memories and reflections of Guru Maharaja. If you'd like to participate and help us improve this service, please contact us!
© Copyright 2020 Matsyavatara.com, tutti i diritti sono riservati.