Written by Balaradhya dasi on 09 March 2018. Posted in Journey Notes.

A life in the spirit of service to his Spiritual Master

All glories to Shrila Gurudeva and Shrila Prabhupada!

We publish it with the desire to share the story of his meeting with His Divine Grace Bhaktivedanta Swami Prabhupada, who transformed his life.

Guru Maharaja has often told with deep emotion about these moments in His presence: “My immense and eternal gratitude goes to Shrila Prabhupada. I needed a vision, which Shrila Prabhupada provided me. I began to read immediately the Bhagavad-gita. A whole new world was going to be opened up to me. All that resonated with me and it was complete to me. I have found my way thanks to the Bhagavad-gita and since then I have no desire but to live according to its teachings, sharing them with all those who wholeheartedly welcome them as well”.

What happened next is the story of a life in service to Shrila Prabhupada, animated with the pure spirit of devotion ...

Matsya Avatara dasa (Marco Ferrini) is a disciple of His Divine Grace A.C. Bhaktivedanta Swami Shrila Prabhupada, from whom he received spiritual initiation in 1977.

New Delhi, India, August 1976. Marco Ferrini a young interior designer who has already gained international success, enters Shrila Prabhupada's room in the ISKCON temple that overlooks Mahatma Gandhi Road, to attend what is going to be the most important meeting of his life. "Unfortunately, modern society is not on God's side - Prabhupada tells him - that's why it isn’t heading towards happiness, on the contrary towards defeat and self-destruction! Do not waste your time. You are a talented person. Do you know where talent comes from? What's its source, who it belongs to? It's God's property, just like everything that exists, including the fruits of your labor. Your one responsibility is to serve Krishna using your talents. The purpose of life is to know Krishna and it can only be achieved by serving Him with love and devotion. When you’ll be back home sing Hare Krishna, study the Bhagavad-gita and talk of Krishna to whomever you meet; Krishna will protect you, do not be afraid ".

Marco takes these recommendations to heart. Once back in Italy, he tells his family about the meeting with Shrila Prabhupada and both his fiancée and parents embrace the path of Krishna consciousness as well.

Thus, he immediately starts serving the Mission of Shrila Prabhupada: three weeks after meeting his Spiritual Master, he organizes a first conference in his home, attended by approximately fifty people, mostly friends who are professionals, in order to introduce them the fundamentals of Krishna Consciousness. In May 1977, for Nrsimha-Caturdashi, Marco and his wife Marisa receive the first initiation from Shrila Prabhupada and their spiritual names of Matsya Avatara dasa and Manupatni devi dasi .
His mother and father will be initiated some time later, receiving the spiritual names of Ananda Vrindavana devi dasi and Caitanya Nitai dasa.

Matsya Avatara dasa has carried out many important services within ISKCON, among them are the following: Setting-up and developing Villa Vrindavana, the first Vaishnava rural community in Italy; funding the first edition of Shrimad-Bhagavatam (first Canto translated in Italian); designing the interior of many temples in Europe, America and India; undertaking the exterior and interior architecture of Shrila Prabhupada’s Samadhi in Mayapur; realizating the Shrila Prabhupada Murtis; editing of articles for “Back To Godhead” Magazine and creating radio programs for Radio Krishna Centrale. 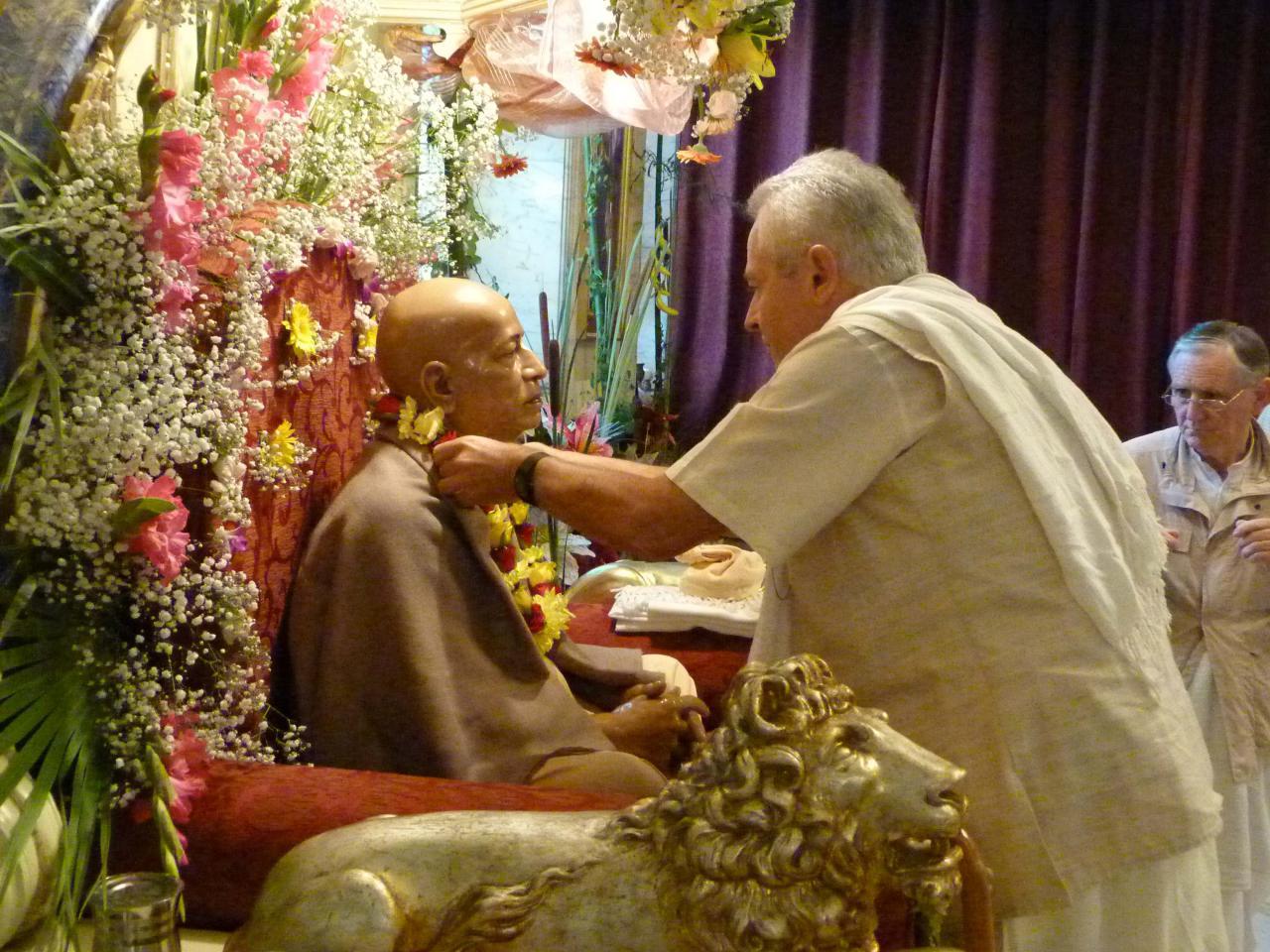 After decades of devoted service within a wide variety of areas, especially towards the impressive development of Villa Vrindavana, that in the ‘80s became one of the largest ISKCON Communities in the world, Matsya Avatara dasa finally feels the need to focus his service to Shrila Prabhupada on spreading His teachings primarily through cultural networks, with the desire of bringing Bhakti into major Italian institutions (Universities, Hospitals, Trade Associations), developing an accessible language to enable Bhakti to flourish in society and within the life of many people hungry for spirituality, but who would be unprepared for a confessional approach.

With this purpose in mind, thanks also to the encouragement of S.S. Hridayananda Gosvami, Radhanath Swami and other dear godbrothers, Matsya Avatara dasa founded the Centro Studi Bhaktivedanta in 1995 (a recognized Non-Profit Cultural Association and of Social Promotion) and later in 2000, the Academy of Traditional Sciences of India. Both Institutions are independent although they pursue the same purpose of Sankirtana as ISKCON. They do so by their own means and specific modalities to serve the great mission of Shrila Prabhupada.

Over the years Matsya Avatara dasa has brought the teachings of Bhakti and Shrila Prabhupada to the most important Italian Universities, such as a 5-Year Academic Course in Indology at the University of Siena; to the main Hospitals in North and Central Italy and to the Orders of Psychologists, by giving lectures related to training courses for Doctors, Psychologists and Healthcare Professionals accredited by the Ministry of Health; to Public Schools within refresher courses valid for education professionals on all levels; to the Italian Parliament and Protomoteca in Campidoglio, and to hundreds of cultural institutes, Trade Associations, socio-religious institutions, with an overall activity of more than 3000 training events held over the past twenty-five years.

In 2008 Matsya Avatara dasa founded the Yoga Teacher Training School, which imparts the knowledge and practice of Bhakti Yoga, as well as the School of Spiritual Relational Counseling, recognized by the Italian Association of Professional Counselors, with the aim of spreading theory and practice regarding bettering relationships in society, based on the philosophical and spiritual Vaishnava Tradition (according to Bhaktivedanta Swami Shrila Prabhupada’s teachings).

In 2017, the Academy of “Kitchen for the Soul” was also established with professional cooking courses enhanced with exams regarding theory of various topics, practical workshops and the participation of star Chefs (disciples of Matsya Avatara dasa). This has greatly contributed to the dissemination on a large-scale and at the highest level of Vaishnava Philosophy, in order to spread the culture of Prasadam, as sanctified food offered to Shri Krishna.

For the last twenty years, Centro Studi Bhaktivedanta has been organizing four intensive residential seminars per year with an average duration of a week each. 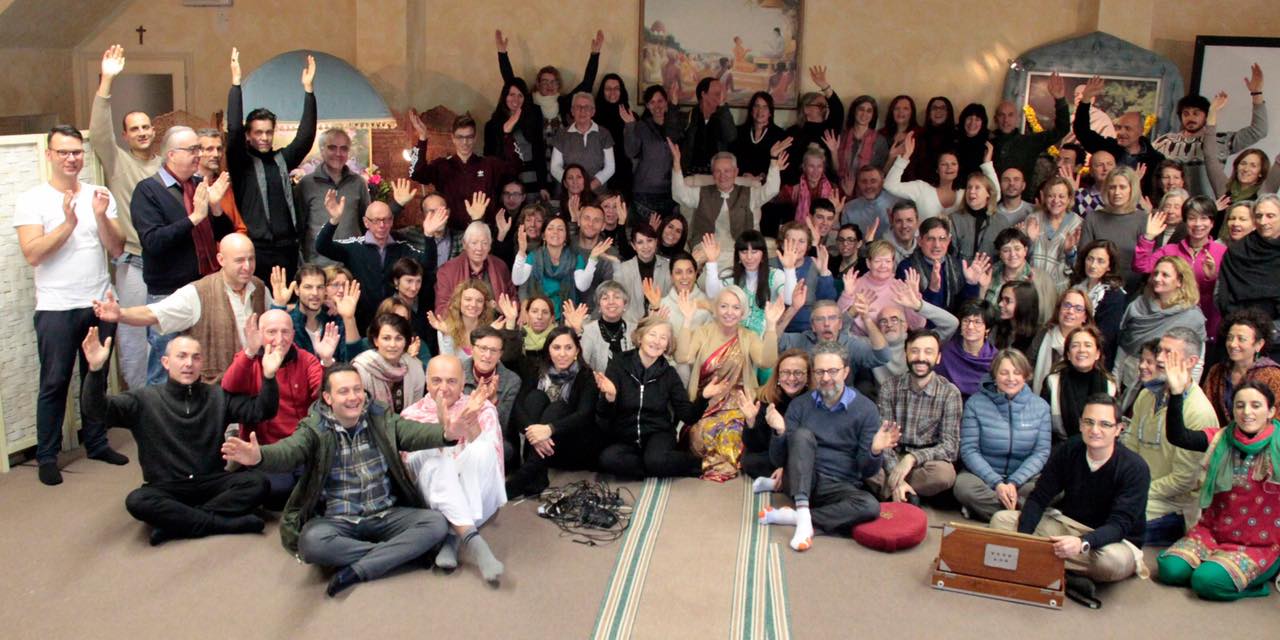 Each seminar is usually attended by approximately 150 participants. The explored topics are the most important works of Shrila Prabhupada and Shastra. During these full-immersion events, people have the opportunity to appreciate and experience first-hand the main benefits of Sadhana-bhakti: Mangala-aratika, Guru-puja to Shrila Prabhupada, meditation on Hari Nama Japa, Prasadam, worship of Deities, Bhajan and Kirtan, and other important expressions of Vaishnava Bhakti.

Thanks to these activities over the past twenty-five years, the teachings of Shrila Prabhupada and the vision of Shri Caitanya Mahaprabhu have successfully reached today's "temples of knowledge" and above all have found their way into thousands of people’s heart, people who have transformed their lives and, in some fortunate cases (over a hundred by now), they have fully embraced the values ​​of Krishna Bhakti Tradition and have received the sacred Diksha from Matsya Avatara dasa. Hence, they have become full members of the great ISKCON Community and Family.

Centro Studi Bhaktivedanta Academy cooperates with the Indian Dev Sanskriti University in Haridwar since 2010, with whom it has also developed scientific research projects and has written articles for the International Journal of Interdisciplinary Sciences, under the name of Matsya Avatara dasa (Marco Ferrini) as Member of the Board of the journal. Further, Matsya Avatara dasa has illustrated a statistical research on the benefits of Hare Krishna Mahamantra Meditation at the Order of Psychologists of Lazio in Rome, in November 2017. This research has been published on specialist magazines.

In 2012, Matsya Avatara dasa was also awarded with the academic title Doctor Honoris Causa - Ph.D. in Philosophy – by Dev Sanskriti University. The President of India and the Chancellor of the University jointly awarded the gold medal and honorary certificate to him.

The motivation for the honorary degree as stated on the Ph.D. certificate: 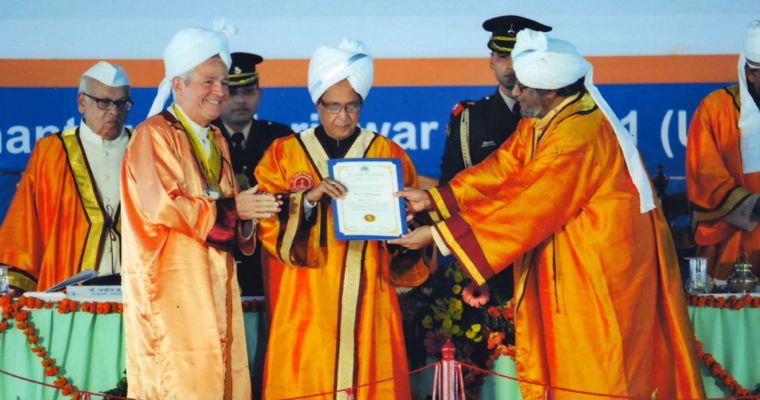 "Marco Ferrini (Matsya Avatara dasa) was awarded the degree of Doctor of Philosophy in recognition of his contribution to the dissemination of the Vedic knowledge throughout the world and for that he himself is a shining example of noble and coherent life, entirely dedicated and without other purposes, to the authentic spirit of Vedas for the wellbeing and welfare of humanity.”